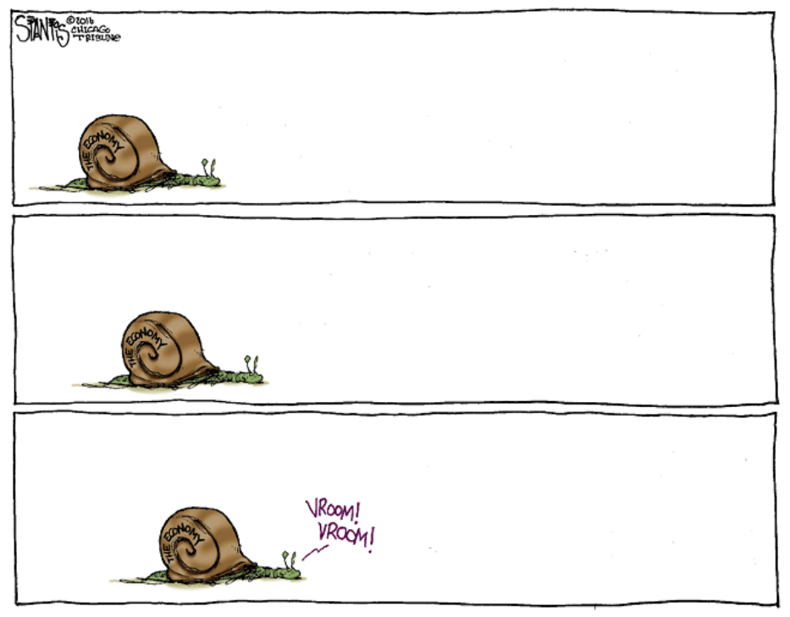 Jeffrey Nutting, Data Analyst with SEMCOG forecasts modest population growth into his study’s 2045 horizon. As people are living longer, they will also have to stay in the workforce longer.

Nutting’s presentation shows those individuals aged 65+ will see an explosion of +430,000 people or 67% more than Michigan has currently. The same data shows Michiganders under the age of 30 will drop by 7% losing 124,000 people. Without a dramatic increase in birth-rates or opening the flood gates to foreign-born workers, the need for skilled workers to fill vacant jobs, known as Michigan’s talent gap, is more like a long, deep valley.

Eric Bussis, Chief Economist and Director for the Michigan Department of Treasury summed up the overall 3-year forecast using of all things surprising from an economist, a bit of humor…

Bussis exclaimed Michigan’s economy is moving, but at a snail’s pace while standing flanked by dual images of Scott Stantis’ Snail Ecomony cartoon. A rather fitting description of the state’s economy he sees ahead.

For construction, household growth rates hold great power to predict economic activity. If people are moving into more new apartments, step-up homes or the house of their dream, they have good paying jobs to afford the rent or house payment. This economic activity is felt throughout the construction industry and takes the shape of nearby store renovations or shopping malls. This growth leads to changes in infrastructure which builds parking lots, roads, and power stations. Construction helps drive the overall economy.

Bussis’ presentation shows rather underperformance for household formation in Michigan citing specifically an overall 66% increase in personal debt driven by exponential increase in student loans. This drag on housing purchasing power is a weight holding down the growth of the overall economy.

Fortunately, Treasury’s data shows the core industry of Michigan having a record year in 2016 overcoming slow but steady decline in the Big 3’s overall market share. Bussis is rather bullish on mobility and finance. Bringing in the brain power to design the automated personal transport system, build those systems here and then install them throughout Michigan’s infrastructure is a sure-fired way to heat up Michigan’s economy.

His economic trend shows continued steady up-hill growth since 2010 and into the future. Various aspects of the overall economy have now exceeded pre-Great Recession or peak levels, with others having not. Though growth, for many significant cultural and economic factors, looks like slow growth ahead for Michigan.

This slow-grow looks to be the order of the decade when it comes to both Michigan’s overall economy and closing Michigan’s construction talent gap.