Michigan Construction is starting a series of blog articles talking about some of the biggest construction jobs in Michigan's history.  We have some amazing and iconic projects throughout our great state.  As we kick off this series, we felt it only appropriate that we start with the landmark that many feel define our great state.  The Mackinac Bridge. 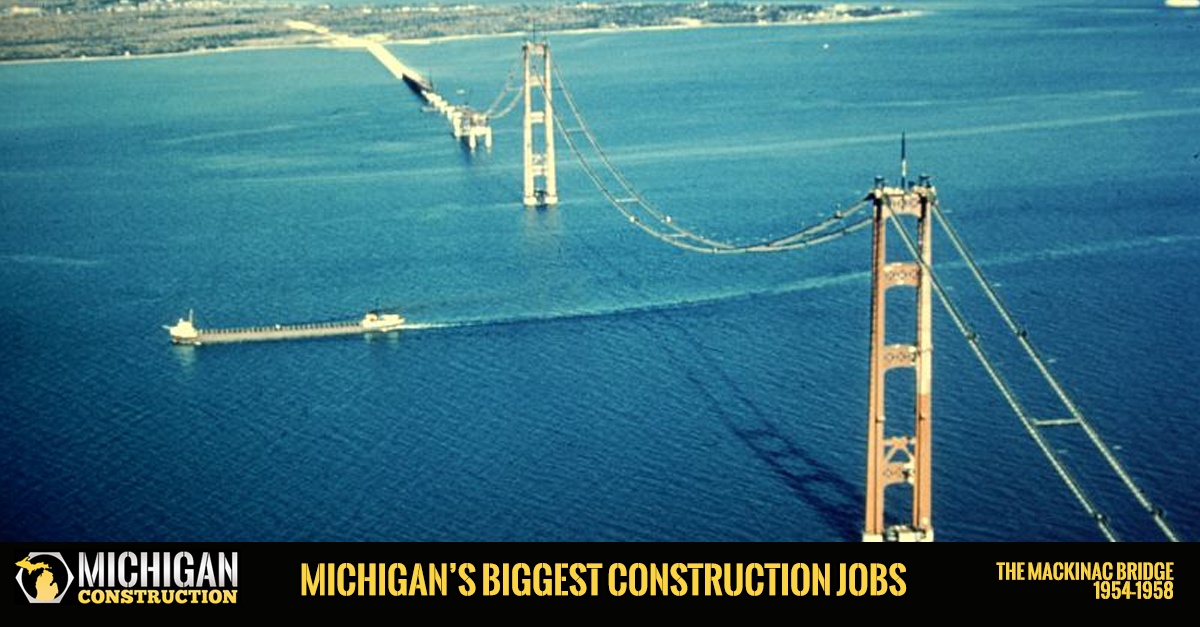 The dream to build the Mackinac bridge began around the same time New York City was nearing completion of one of the most famous engineering marvels ever. The Brooklyn Bridge was dedicated in 1883, and just as fast, those who wanted year-round access across the Straits of Mackinac, were encouraged that this dream could be a reality. In 1884, a store owner from St. Ignace printed an ad featuring the recently completed Brooklyn Bridge, captioning it “Proposed bridge across the Straits of Mackinac.”

For the years following, the crazy ideas on how to build this bridge were plentiful. In fact, in 1920 the state highway commissioner even suggested a floating tunnel across the Straits. Another engineer, Mr. C. E. Fowler of New York City, sought to accomplish the feat by using a series of bridges and causeways that would start at Cheboygan, and travel through Bois Blanc and Round Islands, even connect to Mackinac Island, and leap across the deep channel at St. Ignace.

In 1923 the Michigan Legislature decreed that the State Highway Department should establish a ferry service at the Straits. Within five years, traffic became so heavy that the Governor Fred Green ordered a feasibility study for building a bridge. At the time, the project was estimated at 30 million dollars. That dollar amount seemed to derail the project for several years. 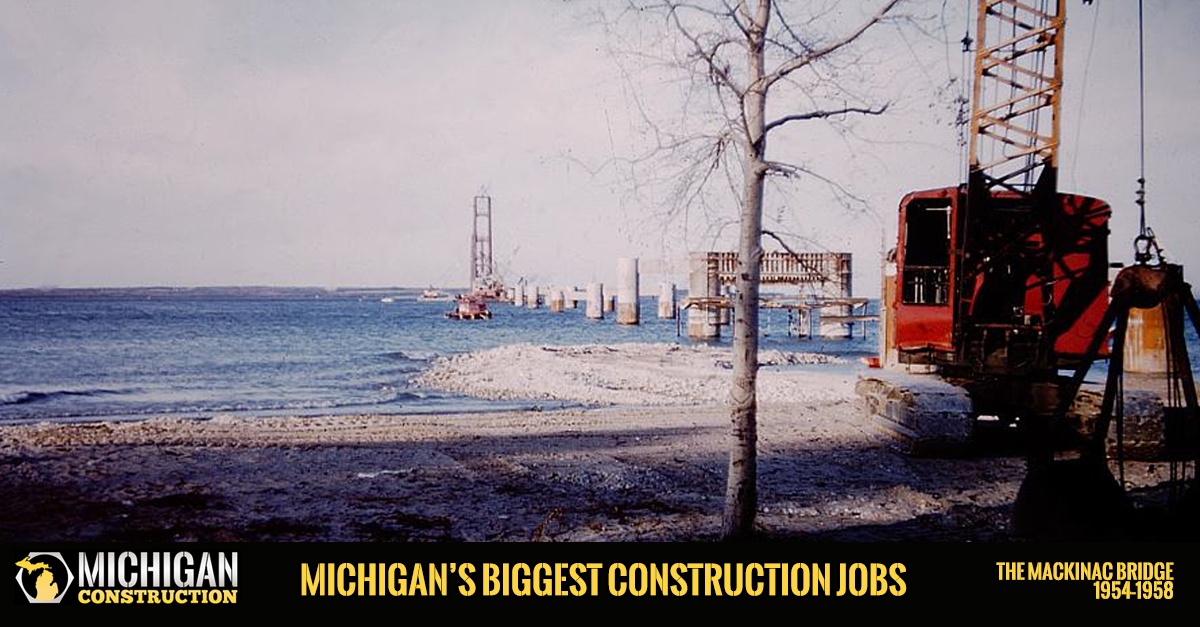 Finally, in 1934 the Michigan Legislature created the “Mackinac Straits Bridge Authority of Michigan” and set its mission to investigate the feasibility of such construction and, gave permission to finance the work through issuing revenue bonds. The Authority began the studies in May.

The Authority concluded that a 5-mile bridge could be built directly across the Straits, at a cost of not more than $32,400,000.  The new bridge would be a combined two lane highway and one-track railway bridge.

The Authority tried twice between 1934 and 1936 to get the necessary loans and grants from the Federal Emergency Administration of Public Works, but both applications were refused despite endorsement by the U.S. Army Corps of Engineers, and the backing of President Roosevelt.

From 1936 to 1940 a new direct route was selected, and numerous studies of a very comprehensive nature were completed. A causeway jutting 4,200 feet into the Straits from St. Ignace south was even constructed, which would eventually connect to a double suspension span, but the US involvement in WWII ended any bridge talk. And, in 1947, the Michigan Legislature abolished the Mackinac Straits Bridge Authority entirely.

By 1950 the legislation was enacted to reinstitute the bridge authority, but limited its scope to determining feasibility only. The law also required consultation with three of the world’s foremost long span bridge engineers and traffic consultants for advice.

In January of 1951 the Authority submitted a preliminary report, stating that a bridge could be built and financed with revenue bonds for $86,000,000. Immediately, the Authority asked the Reconstruction Finance Corporation to purchase $85,000,000 worth of bonds.

In order to make the bonds more attractive, the Legislature passed an act during the Spring of 1953 stating that all operating and maintenance costs (up to $417,000 annually) would be paid for out of gasoline and license plate taxes. By the end of 1953,  was likewise unsuccessful, but toward the end of the year, $99,800,000 worth of Mackinac Bridge bonds were bought by investors all over the country. 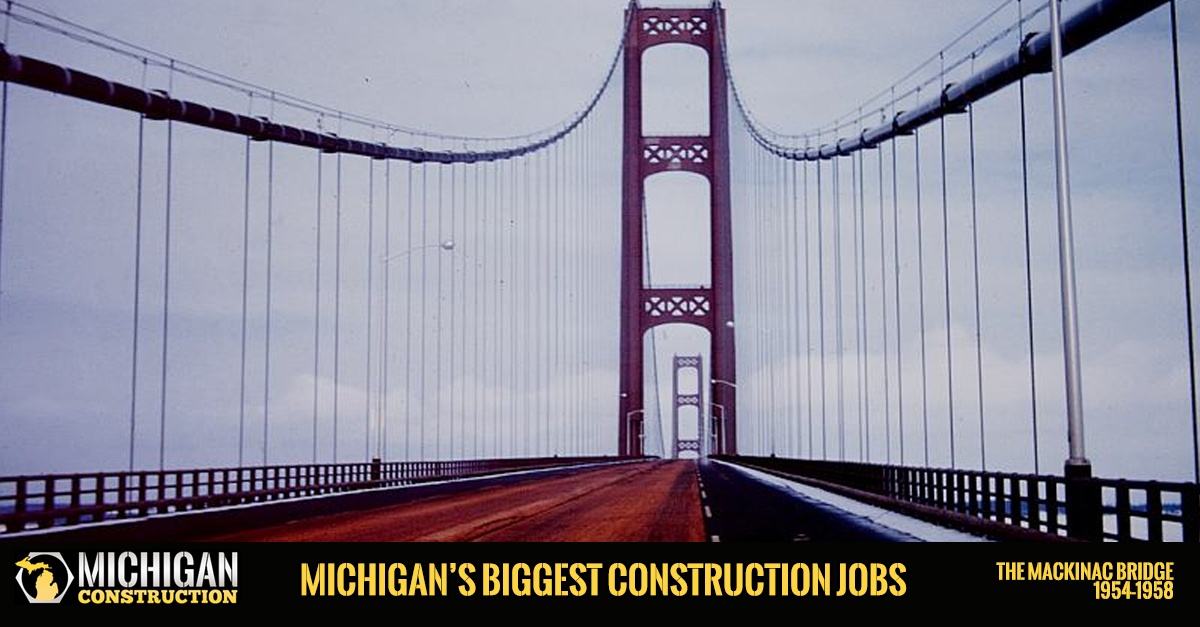 Today, the five-mile bridge, is the world’s longest suspension bridge between cable anchorages, The building of the Mighty Mac was the largest bridge construction fleet ever assembled. The bridge was officially begun amid proper ceremonies on May 7 & 8, 1954, at St. Ignace and Mackinaw City.

Big projects like this are part of Michigan’s Heritage.  If you’ve ever dreamed about being part of something larger than life, you might want to consider a career in the construction industry.  Click to sign up to receive details, or to share with a friend or family member who you think could help build a better Michigan.

Photo 2: The Mackinac Bridge piers are in place and the framework for the deck is being strung across the piers in the spring of 1956.