The Top 10 Construction Toys of All Time

Throughout the years, some of the most popular toys of all time have inspired kids to build things. Whether it’s the allure of heavy equipment miniaturized for kids to play with, toys that stack or snap together to create imaginative structures, or construction themed toys that inspire the builder in us all, the topic of construction is a cornerstone of the toy industry. We’ve assembled our top 10 construction toys of all time here for you. 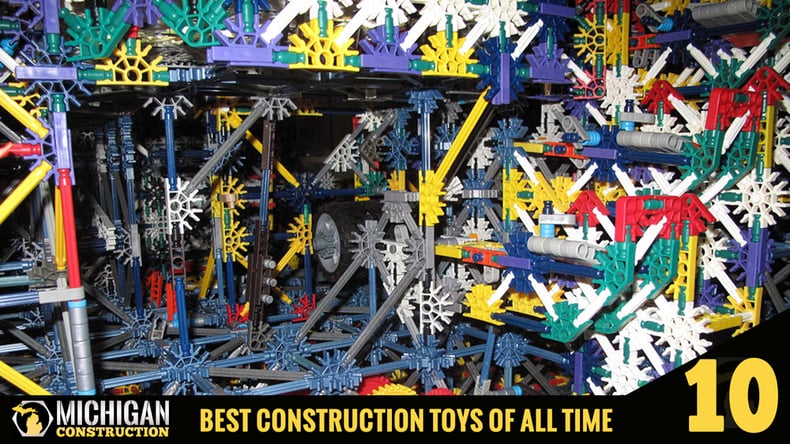 Introduced to curious kids in 1992, K'Nex is designed and produced by K'Nex Industries of Hatfield, Pennsylvania. The basic K'Nex pieces include rods, connectors, and bricks and are made from polyoxymethylene plastic. K’nex also carries a line of products that are targeted for use in the classroom including building sets for DNA models, simple machines and geometry tools.

While there is no official “first building block” one of the first references to toy blocks goes back to 1693, and English Philosopher John Locke. Locke talked about “dice and playthings with letters on them to teach children the alphabet by playing.” Whether the blocks have letters on them, or are simply stackable hunks of wood, the consensus is that building blocks teach kids about shapes, sizes, gravity, friction, and more. Popular versions include wedges, arches and more to create quite elaborate structures.

Children love construction sites, and the “Big Big Loader,” by toy giant TOMY, teaches them quite a few things about being construction workers. Setting up the toy can take a little while the first time, however, once complete, it’s quite a production! It scoops, it loads and it dumps. A motorized chassis recognizes when to swap between actions, and more! Demonstrating an activity performed in a sequence, repeating and looping, is a valuable activity for learning… and doesn’t cut down on the fun either. The toy has continued to be a mainstay on the toy market since the Mid 1970’s. 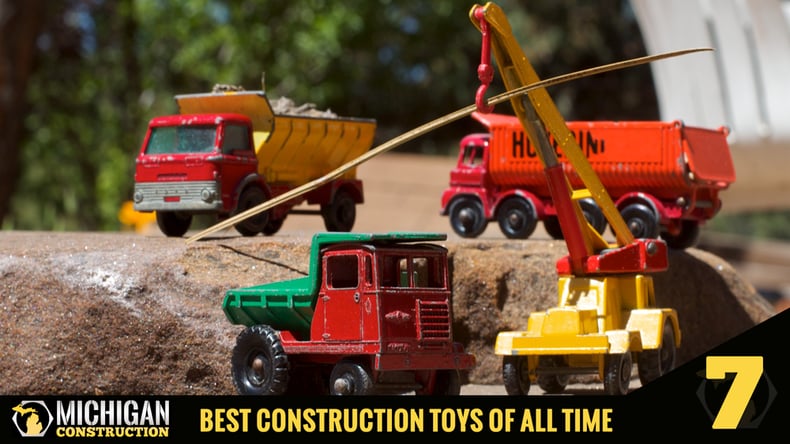 While Matchbox brand toys aren’t exclusively construction themed, many of their best vehicles and sets follow a construction theme. The brand was introduced om 1953 by Lesney Products and is now part of the Mattel toy family. Most of their toys are 1 : 64 scale, but they also have produced vehicles at 1 : 43, 1 : 72, and others as well. In fact, construction, farming and other heavy machinery often varied in scale depending on the vehicle. In the 50’s and 60’s construction vehicles were some of their most popular releases, including series like Models of Yesteryear, Major Packs and King Size. Bottom line? Making big things small is a time-honored tradition of the toy industry, all but perfected by Matchbox.

Bob the Builder is a British children's animated television show, originally filmed in stop motion, about a building contractor, specializing in masonry, along with his colleague Wendy. In addition, the series features various neighbors and friends, and their gang of anthropomorphized work-vehicles and equipment. The toy side of the “BTB” world includes various video games, kiddie rides found in stores and amusement parks, and a line of toys created by Hasbro and later manufactured by Learning Curve. Available in various sets (e.g. Scoop, Muck, Lofty, Dizzy, andys trailer etc.) the toys haven’t been widely available in the US since 2010, but are still quite popular in the UK. 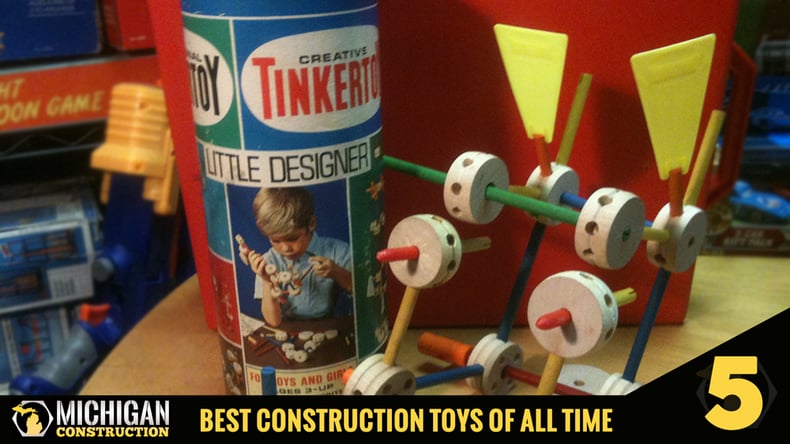 The Tinkertoy Construction Set is a toy construction set for children originally created in 1914. The cornerstone piece of any Tinkertoy set is the “spool,” which is wooden, and roughly two inches in diameter with holes drilled every 45 degrees around the perimeter and one through the center. In addition, sets include the all-important “sticks” of different lengths, wheels, couplings, pulleys, flags and more. Many of the parts have been converted to plastic over the years. The toys popularity also owes some of the credit to its packaging. A “mail tube” design allowed for easy shipping, and made cleanup and storage easy on parents. Taken off the market for safety reasons, some kids (including the author) were lucky enough to grow up with “Giant Tinkertoys” in their homes which featured the same pieces, only MUCH larger. 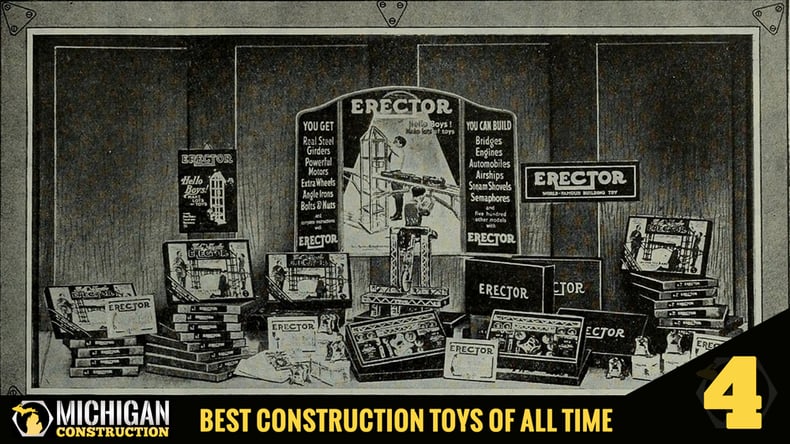 ERECTOR is a brand of metal construction set first sold in 1913. Unlike many wooden sets, Erector could build static structures and dynamic structures that incorporate mechanical movement. It is believed that Erector was the subject of the very first national advertising campaign for a toy, which contributed to its success, selling millions and millions of sets over the years. Through 1932, Erector was sold in wooden boxes, but 1933 through 1962 the sets would be sold in colorful boxes made of painted steel. Over the years, Erector Sets have been used to create some pretty important stuff. In 1949, an Erector set was used to build the precursor to the modern artificial heart by Drs. William Sewell and William Glenn of the Yale School of Medicine: successfully bypassing the heart of a dog for more than an hour. An Erector set was used by Dr. Kevorkian to design his first assisted suicide machine. And in popular culture the "Soarin'" attraction at Disney California Adventure and Epcot was designed with an Erector set.

Lincoln Logs were invented by John Lloyd Wright, second son of the architect Frank Lloyd Wright around 1916 while working in Japan on the Imperial Hotel, which featured a foundation of interlocking logs making the hotel “earthquake proof.” Much like real logs used in a log cabin, Lincoln Logs are notched so that logs may be laid at right angles to each other to form rectangles resembling buildings. Additional parts of the toy set include roofs, chimneys, windows and doors, which bring a realistic appearance to the final creation. Later sets included animals and human figures the same scale as the buildings. The original Lincoln Log set came with instructions on how to build Uncle Tom's Cabin as well as Abraham Lincoln's cabin. The famous toy was inducted into the National Toy Hall of Fame in 1999.

Founded in 1946, Mound Metalcraft originally intended to manufacture garden implements, but had acquired several toy patents through the purchase of their first factory. In 1955 the name Tonka (derived from the Sioux work “Tanka” meaning “great” or “big”) was adopted, and metal toys became the company’s primary business. Over the years, Tonka created many other products such as Star Fairy Dolls, Keypers, Gobots, Pound Puppies, My Little Pony, Magic the Gathering and even barbecue grills, but the iconic Tonka Truck is the companies unforgettable contribution to this list. . Trucks, primarily of the construction variety, have been the most well-known of the Tonka products. There are many versions and varieties of vehicles, but there are 18 basic models: Dump Truck, Front Loader, Bulldozer, Grader, Tow Truck, Paver, Steam Roller, Paint Truck, Helicopter, Excavator, Crane, Cement Mixer, Pile Driver, Longbody Dump Truck, Monster Truck, Snowmobile, Snow Plow, and Flatbed Truck. The largest collection, numbering over 3000, is housed at the Winfred Museum in Winfred, Montana. 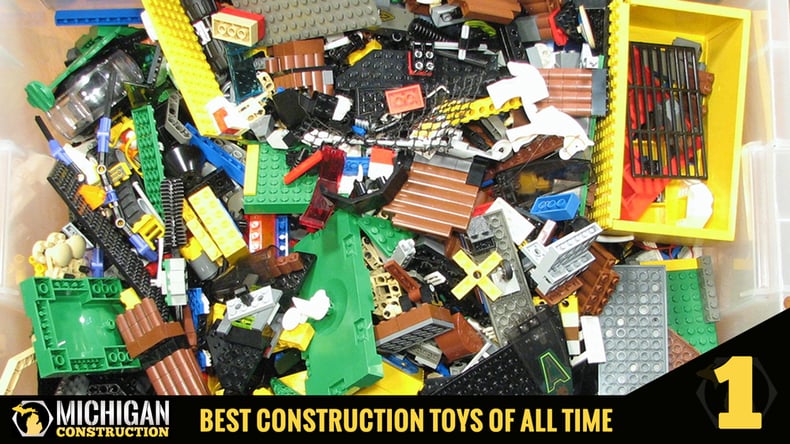 Legos come in at #1 because the possibilities are truly limitless. Whether you purchase specific sets, or use the tiny plastic bricks to build something from your own imagination, Legos are perfect for dreaming big in the world of construction. The name “Lego” comes from the Danish phrase “leg godt” meaning “play well.” Based on, in part, the design of the UK’s “Kiddicraft” self-locking bricks which were released in 1947, Lego bricks have become an international phenomenon, spawning countless product tie-ins, video games and even movies. In 1915, Lego replaced Ferrari as the “world’s most powerful brand.”

This holiday, give the greatest gift of all: a meaningful career in construction and progress towards a better Michigan.